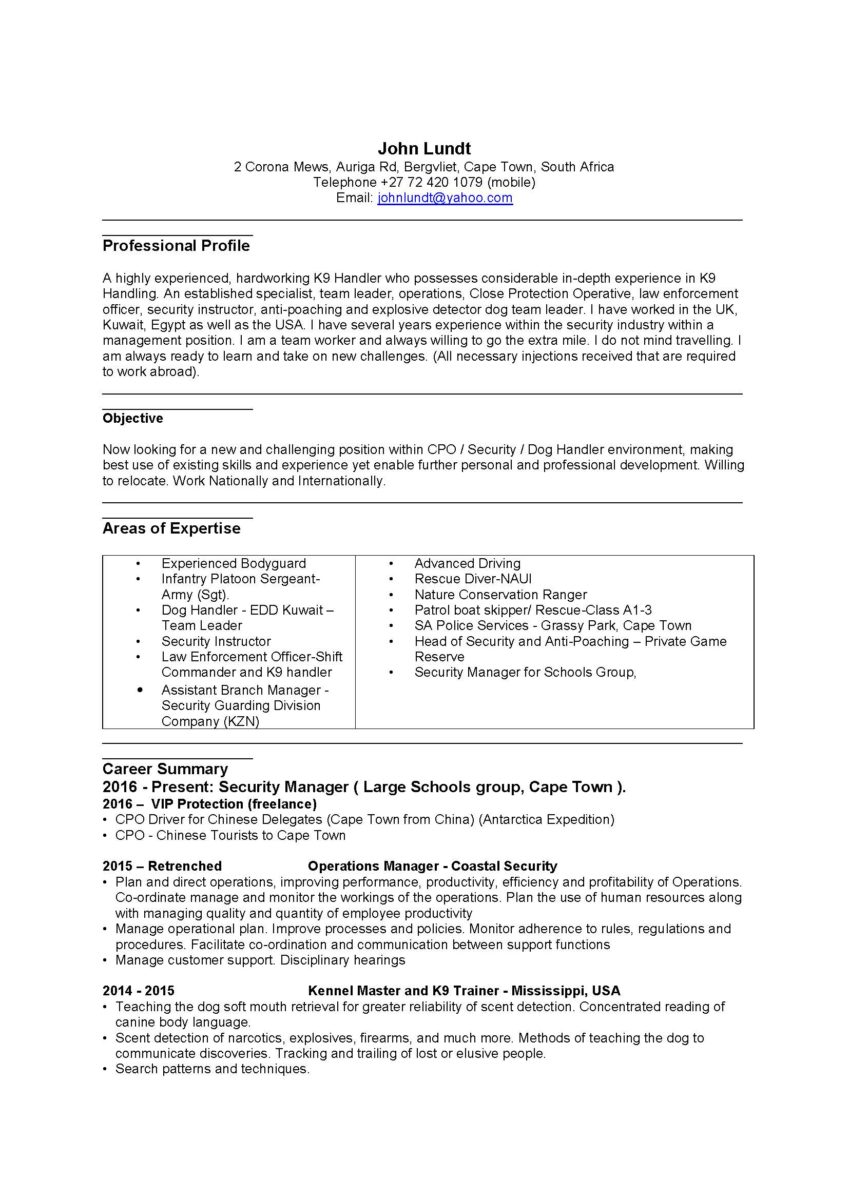 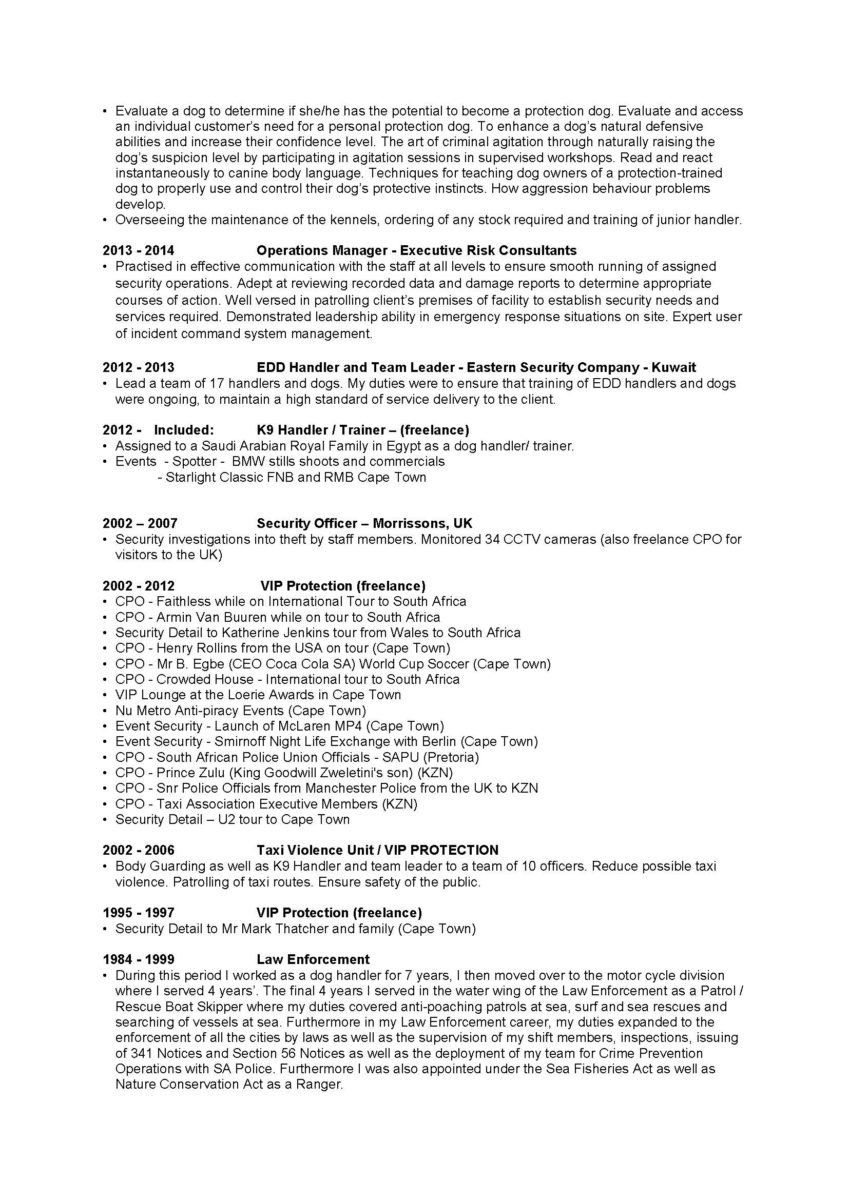 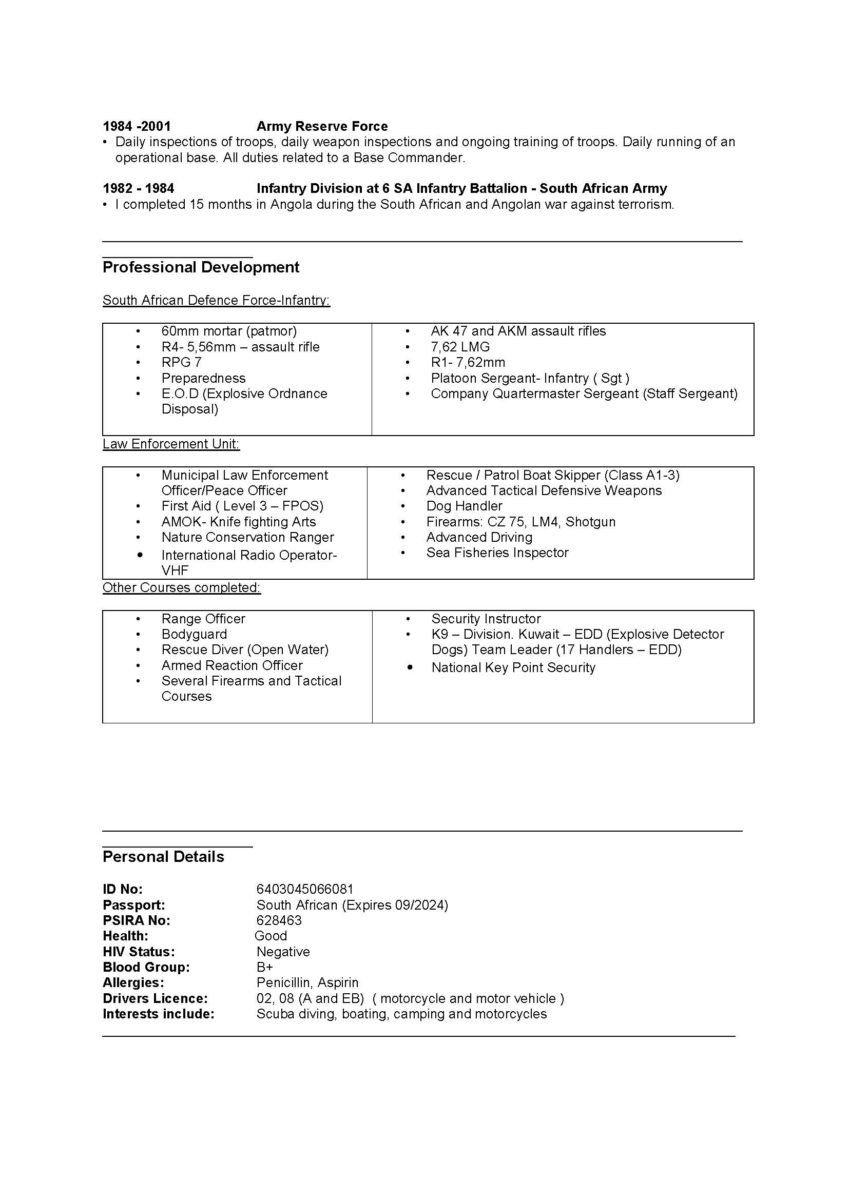 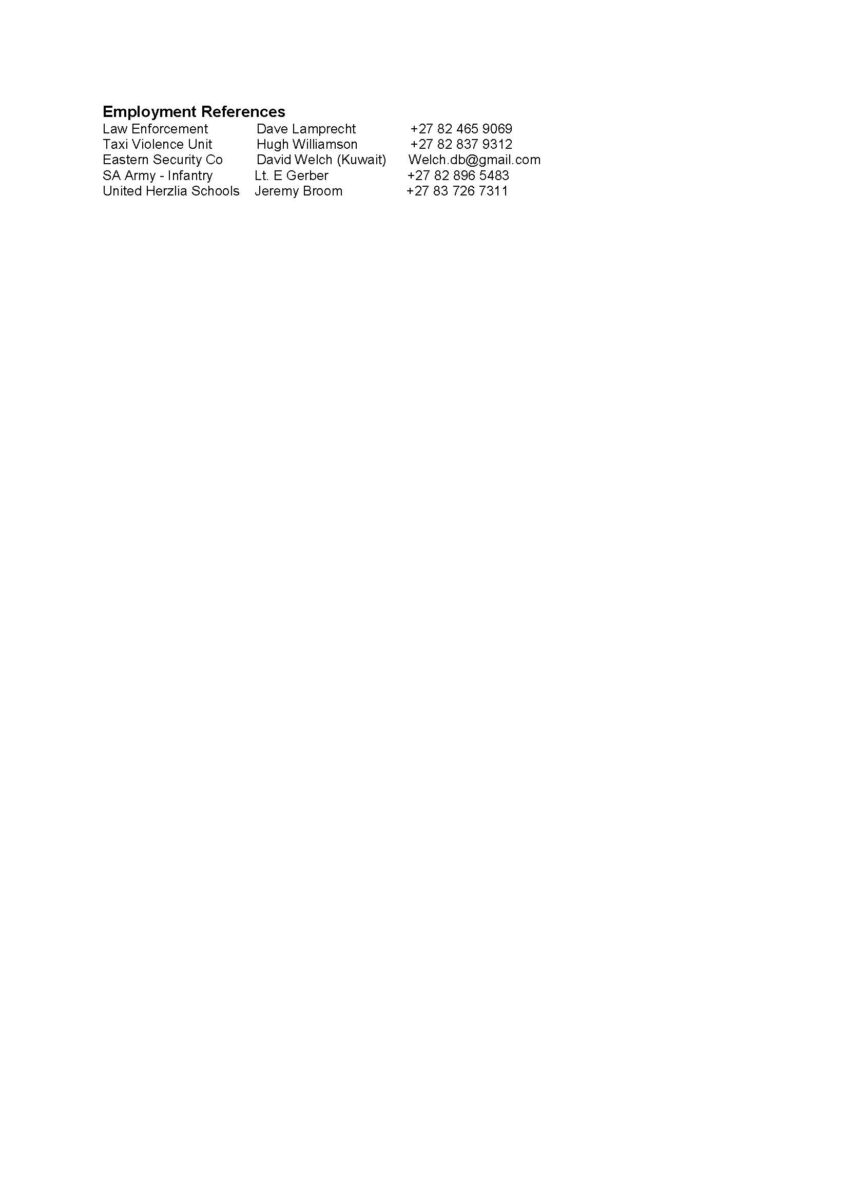 A highly experienced, hardworking K9 Handler who possesses considerable in-depth experience in K9 Handling. An established specialist, team leader, operations, Close Protection Operative, law enforcement officer, security instructor, anti-poaching and explosive detector dog team leader. I have worked in the UK, Kuwait, Egypt as well as the USA. I have several years experience within the security industry within a management position. I am a team worker and always willing to go the extra mile. I do not mind travelling. I am always ready to learn and take on new challenges. (All necessary injections received that are required to work abroad).

Now looking for a new and challenging position within CPO / Security / Dog Handler environment, making best use of existing skills and experience yet enable further personal and professional development. Willing to relocate. Work Nationally and Internationally.

• Evaluate a dog to determine if she/he has the potential to become a protection dog. Evaluate and access an individual customer’s need for a personal protection dog. To enhance a dog’s natural defensive abilities and increase their confidence level. The art of criminal agitation through naturally raising the dog’s suspicion level by participating in agitation sessions in supervised workshops. Read and react instantaneously to canine body language. Techniques for teaching dog owners of a protection-trained
dog to properly use and control their dog’s protective instincts. How aggression behaviour problems develop.
• Overseeing the maintenance of the kennels, ordering of any stock required and training of junior handler.

2012 – 2013 EDD Handler and Team Leader – Eastern Security Company – Kuwait
• Lead a team of 17 handlers and dogs. My duties were to ensure that training of EDD handlers and dogs were ongoing, to maintain a high standard of service delivery to the client.

1984 – 1999 Law Enforcement
• During this period I worked as a dog handler for 7 years, I then moved over to the motor cycle division where I served 4 years’. The final 4 years I served in the water wing of the Law Enforcement as a Patrol / Rescue Boat Skipper where my duties covered anti-poaching patrols at sea, surf and sea rescues and searching of vessels at sea. Furthermore in my Law Enforcement career, my duties expanded to the enforcement of all the cities by laws as well as the supervision of my shift members, inspections, issuing of 341 Notices and Section 56 Notices as well as the deployment of my team for Crime Prevention Operations with SA Police. Furthermore I was also appointed under the Sea Fisheries Act as well as Nature Conservation Act as a Ranger.

1984 -2001 Army Reserve Force
• Daily inspections of troops, daily weapon inspections and ongoing training of troops. Daily running of an operational base. All duties related to a Base Commander.

1982 – 1984 Infantry Division at 6 SA Infantry Battalion – South African Army
• I completed 15 months in Angola during the South African and Angolan war against terrorism. 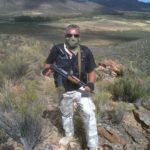 Get Directions on Google MAPS to: Cape Town, South Africa